The Plasma Fractionation Market is projected to grow at a CAGR of 7% during the forecast period 2020-2027.

Plasma fractionation is a method of separating various components of blood plasma to treat protein deficiency in individuals and also in industrial applications as packaging material. It is used in the prevention and treatment of life-threatening diseases caused by trauma, immunologic disorders, and infections. 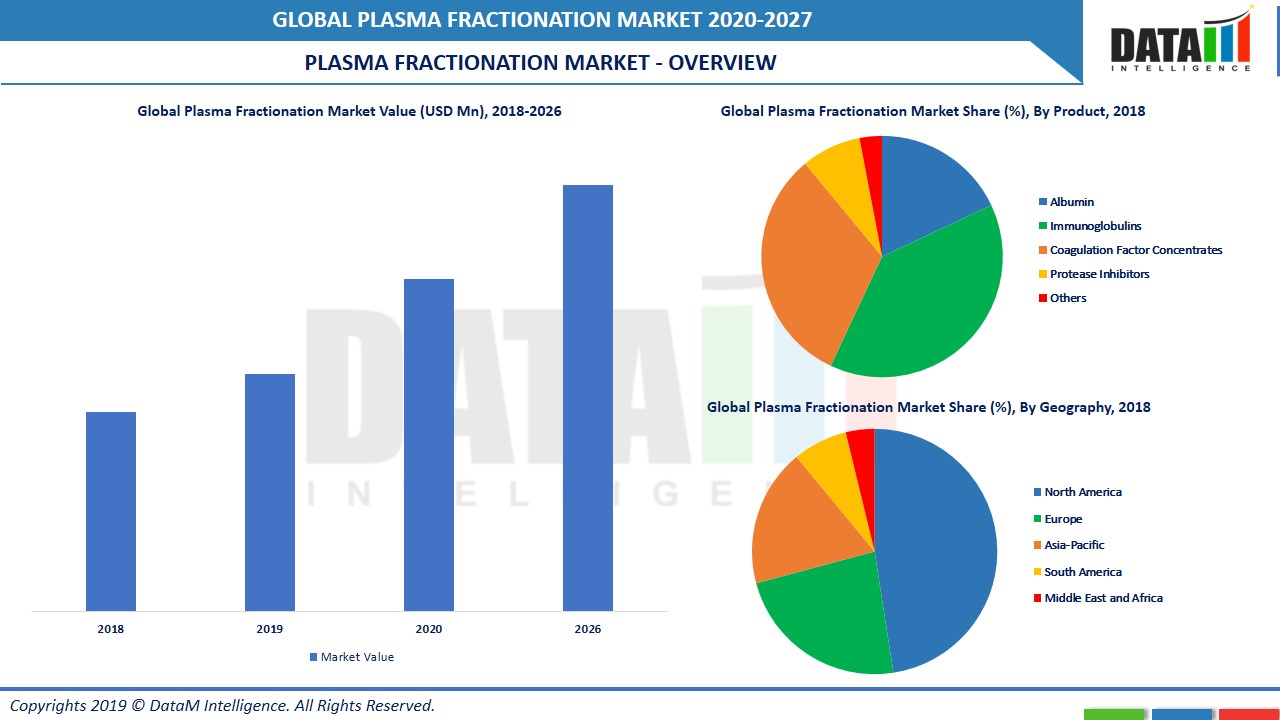 The rising prevalence of respiratory diseases and alpha-1 antitrypsin deficiency (ATTD) along with growing geriatric population, increasing use of immunoglobulins in various therapeutic applications are some of the factors driving the growth of the plasma fractionation market.

Alpha-1 Antitrypsin (AAT) is a protein made in the liver in healthy humans, and certain genetic defects diminish or eliminate the liver’s ability to make AAT. An AAT deficiency causes a variety of conditions, including emphysema, neonatal hepatitis, jaundice, and chronic obstructive pulmonary disease (COPD). Alpha1-antitrypsin deficiency (AATD) is one of the most common genetic disorders associated with significant morbidity and mortality. The prevalence of diagnosed AATD increases with age. According to the European Respiratory Journal, 2017, it is estimated that the number of diagnosed AATD patients in Germany was 19 162, of whom an estimated 8684 patients would have had an additional pulmonary diagnosis. The prevalence of COPD and emphysema in AATD was 32% and 21%, respectively. In addition, according to the WHO, Respiratory diseases are leading causes of death and disability in the world. About 65 million people suffer from chronic obstructive pulmonary disease (COPD) and 3 million die from it each year, making it the third leading cause of death worldwide. About 334 million people suffer from asthma, the most common chronic disease of childhood affecting 14% of all children globally. Hence, the rising prevalence of various respiratory diseases and Alpha1-antitrypsin deficiency (AATD) is driving the growth of the plasma fractionation market globally.

Various advancements in the product by major manufacturers is also one of the major factor contributing to the growth of the market. For instance, in June 2019, Grifols, launched the VISTASEAL™ fibrin sealant with Ethicon Inc. as part of a broad global relationship to provide plasma-protein-based solutions to manage surgical bleeding. Also, in September 2018, Grifols launched GamaSTAN immune globulin (human) for hepatitis A virus (HAV) and measles postexposure prophylaxis, and Prolastin-C Liquid [alpha-1 proteinase inhibitor, liquid] for the treatment of alpha-1 antitrypsin deficiency.

However, the high cost of plasma products, the emergence of recombinant alternatives, and limited reimbursements are some of the factors hindering the growth of the plasma fractionation market during the forecast period.

By product, the plasma fractionation market is segmented into albumin, immunoglobulins, coagulation factor concentrates, protease inhibitors, and others. Among these, the immunoglobulin segment accounted for the largest market share in 2018 and expected to dominate the plasma fractionation market during the forecast period (2020-2027). The immunoglobulins segment is further classified into subcutaneous immunoglobulins, intravenous immunoglobulins, and others. The intravenous immunoglobulins (IVIg) held the largest market share in 2018 as it is the most extensively used plasma product globally for the treatment of chronic inflammatory demyelinating polyneuropathy (CIDP), multiple sclerosis, dermatomyositis, hypogammaglobinemia, Guillain-Barre syndrome, immune cytopenias, primary antibody deficiency, vacuities, asthma, and systemic lupus erythematosus, among other disorders. The rising prevalence of these disorders is fuelling the growth of this segment. The subcutaneous immunoglobulins (SCIg) segment is estimated to grow at the highest CAGR during the forecast period (2020-2027). SCIg has several advantages over IVIg such as; it is the best alternative for patients with limited vascular access who cannot tolerate adverse effects associated with IVIg. Slow administration and absorption of SCIg reduce the rapid variation in serum Ig levels, which further reduces adverse drug reactions. These advantages are expected to drive the growth in this product segment. The major players are innovating new products which lead to the growth of the immunoglobulins market. For instance, in September 2018, Grifols launched GamaSTAN immune globulin (human) for hepatitis A virus (HAV) and measles postexposure prophylaxis, and Prolastin-C Liquid [alpha-1 proteinase inhibitor, liquid] for the treatment of alpha-1 antitrypsin deficiency.

The coagulation factor market is segmented into Von Willebrand Factor, Factor IX, Factor VIII, Factor XIII, Fibrinogen Concentrates, and Prothrombin Complex. Among these, the concentrate Factor VIII segment held the highest share in the coagulation factor concentrates market, owing to the rising geriatric population, rising number of hemophilic patients, increasing preference for prophylactic treatments for people suffering from hemophilia, and increasing diagnosis of hemophilia. In addition, the unavailability of advanced therapies in developing countries for a majority of hemophilia patients is also expected to drive the growth of this segment.

North America holds the dominant market share for plasma fractionation in 2018, and it is expected to maintain the growth over the forecast period, owing to increasing use of immunoglobulins in various applications such as neurological and autoimmune diseases. The growing number of respiratory diseases will increase the adoption of coagulation factors, which in turn will drive the market for plasma fractionation in North America. The burden of respiratory diseases is increasing in United States. According to the National Center for Health Statistics, currently more than 25 million people in the United States have asthma and approximately 14.8 million adults have been diagnosed with COPD. COPD is the 4th leading cause of death in the United States.

According to the Centers for Disease Control and Prevention (CDC), in 2014, approximately 142,000 individuals died from COPD, and almost as many died from lung cancer (approximately 155,500) in the same year. In nearly 8 out of 10 cases, COPD is caused by exposure to cigarette smoke. Other environmental exposures (such as those in the workplace) may also cause COPD.

There are advancements in processes, improved formulations, and increased production efficiency. Advancement in technology leads to improved process of plasma manufacturing, hence leading to growth of the market in this region. There are many clinics across the region for targeted gene therapies with new advancements in treatments related to cardiovascular diseases, cancer immunotherapies, and blood-related disorders. Several innovations in manufacturing processes (e.g. improvement of yield), product developments (e.g. such as subcutaneous IG, IVIg 10% concentration, and IVIg liquid presentation), presence of advanced virus removal technologies (such as nanofiltration), and the development of newer plasma products such as ceruloplasmin and IgA are also supporting the growth of the plasma fractionation market in these regions. For instance, in August 2016, Shire, announced the U.S. launch of VONVENDI [von Willebrand factor (Recombinant)], the only recombinant treatment for adults living with von Willebrand disease (VWD). The treatment is also the first in the United States that has the option to dose recombinant von Willebrand factor (rVWF) independent of recombinant Factor VIII (rFVIII), based on patient need. This attribute allows for tailored treatment for patients who may not require additional FVIII.

In June 2019, Grifols, one of the world’s three top providers of plasma-derived medicines to treat life-threatening diseases, launched the VISTASEAL™ fibrin sealant with Ethicon Inc. as part of a broad global relationship to provide plasma-protein-based solutions to manage surgical bleeding.

In September 2018, Octapharma invested USD 25 million (Euro 21 million) in a new multi-function facility in Springe, Germany, that will have a new production line for human normal immunoglobulin panzyga, alongside with human albumi and albunorm.

In August 2018, Grifols acquired Biotest US Corporation, a subsidiary of Biotest (Germany), to expand its plasma collection network with the addition of 24 Biotest centers in the US.

Q. Which region holds major market share?
A. North America holds the dominant market share for plasma fractionation in 2018, and it is expected to maintain the growth over the forecast period, owing to increasing use of immunoglobulins in various applications such as neurological and autoimmune diseases.

Q. What is the key driving factors of the Plasma Fractionation Market?
A. The rising prevalence of respiratory diseases and alpha-1 antitrypsin deficiency (ATTD) along with growing geriatric population, increasing use of immunoglobulins in various therapeutic applications are some of the factors driving the growth of the plasma fractionation market.