The Global Plasma Lighting market is expected to grow at a CAGR of 4.6 % to reach a market value of USD XX million by 2026.Due to increasing demand for the energy-efficient lighting systems all around the world will grow the market for Plasma Lighting in the forecast period. 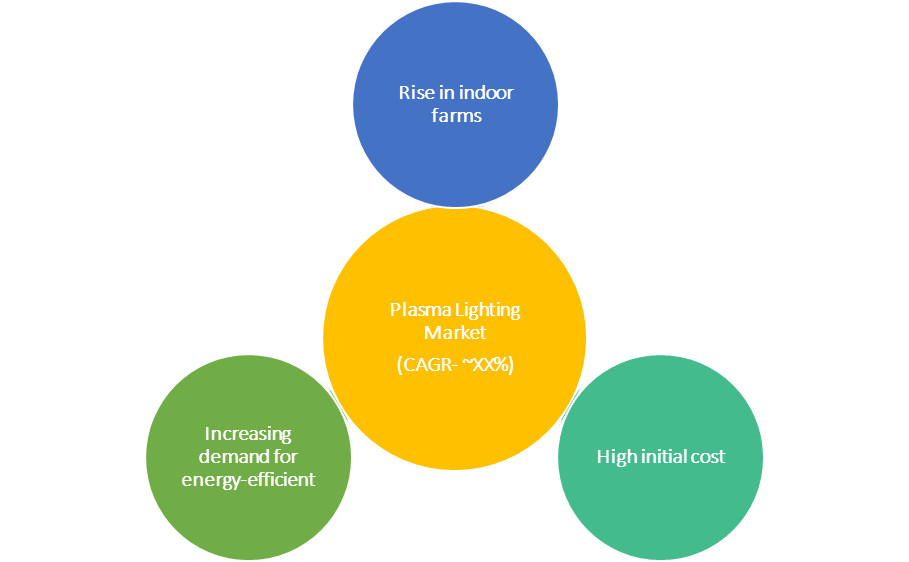 The global Plasma Lighting market is primarily driven by the demand for energy-efficient lighting systems. The rise in indoor farming all around which requires artificial lighting for the plants to grow and the plasma light has several advantages over another substitute lighting. The plasma light is more similar to the sunlight due to the broader spectrum of light emission by plasma. Hence plasma lighting has found best use in the indoor horticulture.Plasma lights offer the fullest spectrum of lighting and work through light-emitting plasma bulbs which energize a quartz bulb to generate solid-state light source. Usage of plasma lamps can save more than 40% of energy, which in turns save more than one-third of the electricity bills. Plasma lamps provide full-spectrum light with maintaining the level of efficiency and removes the limitation of dealing with a limited LED spectrum. Moreover, plasma lamps are twice as efficient as LED bulbs available in the market.

The growing construction of data centers activities all around the globe is the other reason for the plasma lighting market to have a positive impact.With an increase in the computational powers of system produces more heat and to have efficiency in the proper functioning of them requires adequate temperature, and hence the market will grow for Plasma Lighting in the forecast period as they produce less heat themselves. The rising power of data in today’s world is asking for a greater number of the data center to be built by various companies.

However, due to high initial cost and amount of low-cost substitutes available in the market are some of the factors that willbe hampering the growth of Plasma Lighting in the forecast period.

By Application, the global Plasma Lightingmarket segmented intoIndustrial, Horticulture, Sports & Entertainment, Roadways, Streets, and Tunnels, and Others.Industrial application has the dominant position in the Plasma Lightingmarket and are expected to retain its dominance in the forecasted period due to the increase in the number of commercial and industrial spaces across globe.The rise in the economies there is the increase in commercial and industrial spaces all around the world which are asking for the energy-efficient lighting solution which is being fulfilled by the plasma lighting which has several advantages from its substitutes available in market.It is expected that Industrial applicationmarket will grow at a CAGR of ~XX% during the forecast period.

Europe holds the largest market share for Plasma Lighting due to the rise in horticultureand gardening in the whole region. With countries like Romania and Poland have urban people more engaged in gardening. The people there are growing organic herbs and spices for their consumption, and there is a growing interest in green living surrounding. The countries like Belgium which has a large market for its Azalea and Flemish bay plant has promising growth in the indoor horticulture in the forecast period. For instance,Belgian horticulture, with Flanders as its main production region (approximately 90%), is known for its variety, tradition, professional skill, customized solutions, and quality. The showpieces of Belgian horticulture remain the azalea, tree nursery products, and chrysanthemums in pots. For over ten years already, the tree nursery has been the most important subsector with an international allure. However, the market position of Flanders’ indoor plants is also enviable.

North Americais after Europe in terms of the market share of Plasma Lightingdue to the rise in thecommercial constructions, infrastructure developments and also because of the upcoming supermarket and hypermarket constructionwill be the major drivers for the plasma lighting market in the region.

For instance, A sharp increase in construction of nonresidential properties in the US drove much of that boost, and warehouse construction value surged 14 percent over the same period, the report said. Specifically, several significant warehouse projects - such as a $150 million facility near Birmingham, Alabama, and a $107 million multi-building complex in Fremont, California - were huge drivers of that national uptick in warehouse construction spending.

Key players are adopting strategies such as investing in R&D,new product launches, expansion in Technologyto stand out as strong competitors in the market. Global Plasma Lighting is a competitive market with the presence of various global and regional players in the market. The major playersCeravision Limited, Plasma International GmbH, Solaronix SA, Hive Lighting Inc, and Lumartix SA. Other key players in the market include Topanga Technologies Inc, Luxim Corporation, Ka Shui International Holdings, Griffin & Ray, and Guangzhou Kaiming Industries.

Why Purchase the Report?
•    Identify new growth opportunities with In-depth insights for strategic business plans and design innovative strategies for sustainable growth.
•    Comprehensive details on factors that will drive or challenge the growth of market players.
•    Product mapping in excel for the key products of all major market players
•    Deep Sector-Specific Intelligence
•    Attractiveness and consumer behavior analysis for every region
•    Highlights of the competitive landscape
**The Plasma Lighting Market report would provide access to an approx., 90 market data table, 150 figures, and 200 pages.