Cancer biomarkers are biological molecules secreted either by tumors or from tissues in response to cancer, which are then later used to measure and evaluate the cancer growth processes in the body. Cancer biomarkers are used on or for the patients when undergoing curative cancer treatment; these can be further used to follow-up the disease condition at the early stage or for the possible recurrent disease. Various national governments are now focused to invest more in the processor to cure the disease at early stages or entirely to prevent the disease to be more worsening.

The majority of the healthcare bodies are into cancer research and its studies. the rising prevalence of cancer is in a way leading to innovation and development in the area of a cancer diagnosis with biomarkers. For instance, according to 2015, the U.K. Department of Health & Social Care invested US 7.5 billion in cancer-related treatment and services, annually 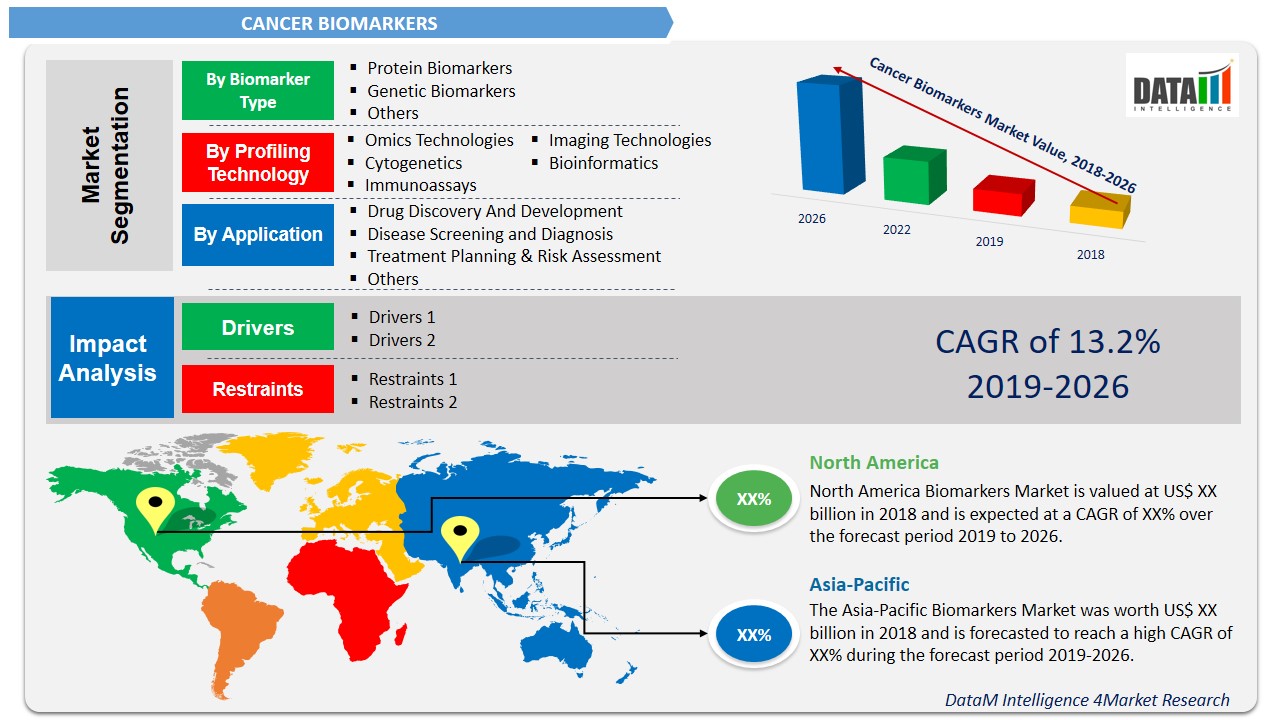 According to the World Cancer Research Fund (WCRF) International, 2015 data findings, 58% of the lung cancer cases were reported in emerging economies, in 2014. Hungary had the highest rate of lung cancer, followed by Serbia, and North Korea. Moreover, the highest incidence of lung cancer was registered in North America and Europe, for the same year. According to the National Cancer Institute, in 2014, around 66,771 people were suffering from liver, and intrahepatic bile duct cancer in the U.S. Liver and intrahepatic bile duct cancer represented 2.4% of all new cancer cases reported in the U.S. in 2014. Moreover, obesity, diabetes, alcoholic liver disease (cirrhosis), chronic hepatitis B, hepatitis C infections, tobacco, and smoking are the most common risk factors for liver cancer. According to the Centers for Disease Control and Prevention (CDC), February 2018 data findings, each year in the U.S., around 22,000 men and 9,000 women suffer from liver cancer, and about 16,000 men and 8,000 women die from liver cancer. Thus, the substantial increase in the incidence and mortality rate of liver cancer in the country is expected to boost the growth of the cancer biomarkers market, shortly. All such cancer is paving the way for new cancer diagnostic tests with the use of cancer biomarkers, which might help in the early detection of cancer, which can further impact the prevalence rate of cancer in middle and lower economic countries.

However, certain factors are expected to hinder the cancer biomarker market are, including high treatment cost and unfavorable reimbursement policies for cancer biomarkers. The cancer diagnosis is relatively expensive, which primarily includes medical and non-medical expenses for cancer diagnosis, treatment, and cancer care. For instance, according to the Cancer Action Network, in 2014, cancer patients in the U.S. paid around US 4 billion out-of-pocket for cancer treatment.

The government of various healthcare organizations, private organizations, have increased research and development funding for cancer biomarkers. the increasing prevalence of cancer coupled with raising funds for cancer biomarker testing has immensely boosted the market for cancer biomarker market. For instance, in June 2018, Cancer Research U.K., proposed funding of US 140,922 per year, through a biomarker project for biomarker assay development, validation, and qualification for use in clinical cancer diagnosis., Additionally, in March 2016, the National Cancer Institute has earmarked 5.5 million in the fiscal year 2016 to fund the establishment of laboratories to advance research on biomarkers and biomarker assays for cancers of the breast, prostate, lung, and genitourinary organs, as well as cancers with rapidly rising incidence rates. In the year 2016, Auckland entrepreneur, Mr. Liangren Li, and his family announced a record 10 million endowment fund to provide annual interest for investing in cancer research. The 480,000 projects will run over three years starting in September 2016 and focus on biomarkers for gynecological cancers. It plans to expand to include other tumor types over this period. The grant was allocated for initiating the PROSPER (Profiling of Oncology Patients as part of the Clinical Care and Research) project. In 2016, the National Cancer Institute (NCI) invested US 3.9 billion for cancer research activities, which accounts for 70.8% of the overall NCI 2016 budget. It invested around US 533 million in cancer detection and diagnostic research activities. Moreover, in 2016, NCI allocated 40.4% of its funds for Research Project Grants (RPGs).

Who can use this report?

Q. Who are the leading players in the Cancer Biomarkers Market?
A. AbbVie, Boehringer Ingelheim, Sanofi, Pfizer, Merck, GSK, .Etc.

Q. Which region holds the major market share for Cancer Biomarkers Market?
A. North America accounts for the largest market share in 2017 with the market being dominated by the United States.