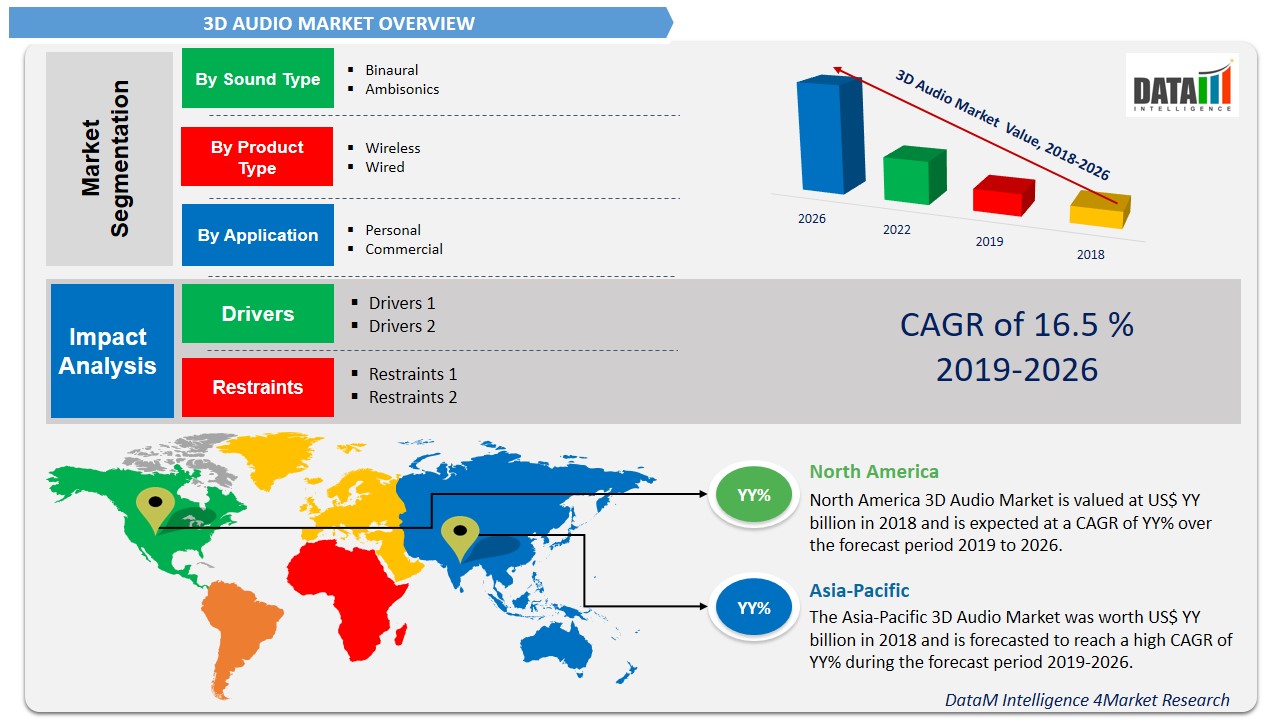 3D Audio Sound or 3D Sound perception is the capability of the human auditory system to locate sound in space and more widely, to be aware of the acoustic structure of its surrounding environment. It is the natural way we listen to the world.

3D audio effects are a group of sound effects that manipulate the sound produced by stereo speakers, surround-sound speakers, speaker-arrays, or headphones. 3D audio frequently involves the virtual placement of sound sources anywhere in three-dimensional space, including behind, above or below the listener. 3-D audio processing is the spatial domain convolution of sound waves using Head-related transfer functions.

Ambisonics has recently gained traction since YouTube, Oculus VR and Facebook adopted it as a standard for their 360-degree videos. Nowadays, Ambisonics has become a widely used 360-degree spatial audio standard in VR and 360 video use cases. Ambisonics is expected to be the fastest growing segment.

By-product Type, 3D Audio market is segmented into Wired and wireless. Wireless segment is expected to grow fastest due to demand in consumer & defense applications.

Recently, 3D audio technology is being applied in the defense sector. On Nov. 5, 2018, US Air Force Materiel Command announced plans to award a sole-source contract to Danish defense contractor Terma for the purchase of that company’s Aircraft Audio Management System (AAMS). The commercial segment accounted for significant market share.

By region, Global 3D Audio Market is segmented into North America, South America, Asia-pacific, Europe, and Rest of the world. Asia-pacific accounted for significant market share due to China, India.

3D audio is widely used in the movie industry in India. Due to the large population combined with significant per capita spending on consumer electronics, Asia-pacific accounted for significant market share.

China has multiple companies innovating in hardware and software solutions designed for both creating and consuming 3D Audio. Asia-pacific is also expected to grow at a rapid rate due to technological advances in China. North America accounted for the second-largest market share due to innovation in High-end applications.

Why purchase the report?

Who can benefit from this report?