The Global Well Interventions Market is expected to grow at a CAGR of 5.1% during the forecasting period (2020-2027).

A well intervention is any operation carried out on an oil or gas well all through, or at the final level of its productive life, that modifies the state and situation of the well and or well geometry, provides well diagnostics or manages the production of the well. Well intervention can also be called as 'well work'. Well intervention operations are done using the slick line, wireline, or coiled tubing tools to clear the sand from falling into the well, to remove the paraffin, hydrates, or to clear the debris through the fishing operations. SBS Energy Services is an example of a company that focusses on snubbing/workover and coil tubing well intervention. 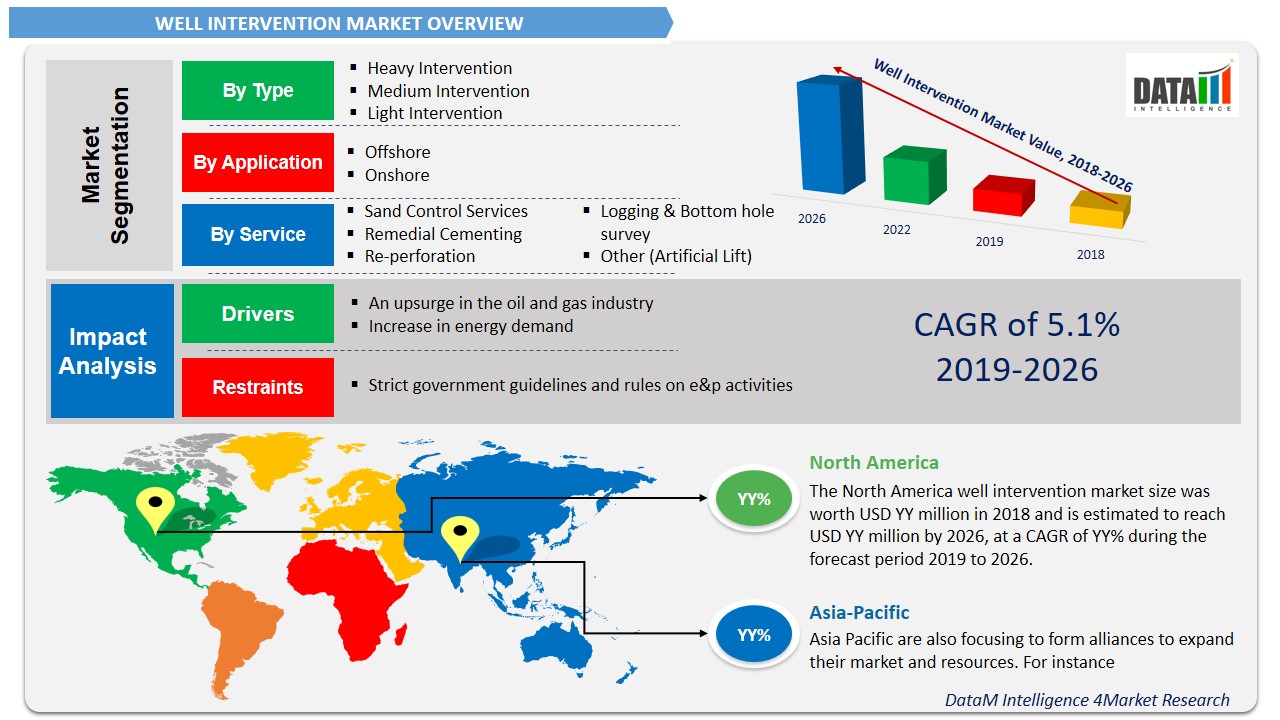 Growing production of crude oil across the globe is the major factor driving the well intervention market. Increasing demand for crude oil associated with an increase in installations of new production sites with the advanced technology with high precision are the factors additionally contributing the growth of the global well intervention market. According to the International Energy association in 2019, the daily production of offshore oil is expected to increase from 26.4 thousand barrels of oil equivalent per day to 27.4 thousand barrels of oil equivalent per day is expected to generate equal market growth and demand for well intervention market. Furthermore, In Middle East particularly in Saudi Arabia, oil production is increasing with double-digit growth. For instance, according to the U.S EIA, Saudi Arabia is the second major oil-producing nation, with an average production of 12.42 million barrels per day, accounting for 12% of global oil production.

Strict government regulations on E&P activities are the major market restraining factors. The oil and gas drilling sectors are recognized as a vital part of the global economy, in terms of the long- and short-term. There are many regulations that are normative for well intervention and subsea operations with the petroleum act. Regulatory issues include field access traffic and weight levels, frost thaw constraints, reclamation concerns, weed control issues, drainage and containment, fire suppression and response, seasonal wildlife concerns, dust control, access control (locked gates and ensuring sensitive areas aren't exposed to public traffic), final visual impact, noise and the duration of noise during development, mud transported to county or municipal roads and inspection requirements. So, getting all the permissions and following regulations ordered by the local governments mentioned above consumes a lot of time for processing which acts as a major restraint to start E&P activities.

Based on the service, the global well intervention market is divided into sand control services, remedial cementing, logging & bottom hole survey, re-perforation, zonal isolation, and others. Others include artificial lift, fishing, and, well abandonment. The global well intervention market size by sand control services segment was worth USD YY million in 2018 and is estimated to reach USD YY million by 2026, at a CAGR of YY% during the forecast period.

The North America well intervention market size was worth USD YY million in 2018 and is estimated to reach USD YY million by 2026, at a CAGR of YY% during the forecast period. North America is dominating the global Well Intervention market in 2018 and estimated to hold the largest market size over the forecast period (2020-2027).  North America accounted for the largest share of the market in 2018 due to the gradual rise in oil production and constant E&P activities. The top oil and gas companies like Exxon Mobile Corp, Chevron Corp, Anadarko Petroleum, Chesapeake Energy, Encana and many more are having its presence in North America particularly in USA. However, the market in APAC is anticipated to grow at the highest pace in the forecast period due to the presence of largest oil and gas consumption economies like India, China, Australia, and South East Asia countries. Companies in Asia Pacific are also focusing to form alliances to expand their market and resources. For instance, In August 2019, China-based COOEC Offshore has formed an alliance with international oilfield services company Expro, expanding its Riserless Well Intervention (RWI) capabilities and resources.

In August 2019, Norwegian oil major Equinor has received consent from the Petroleum Safety Authority (PSA) to use the Island Wellserver vessel for light well intervention.

In January 2017, Schlumberger acquired Peak Well System, a specialist in the design and development of advanced downhole tools for well intervention, well integrity and flow control.

**The Well Intervention report would provide access to an approx, 61 data tables, 53 figures, and 165 pages.