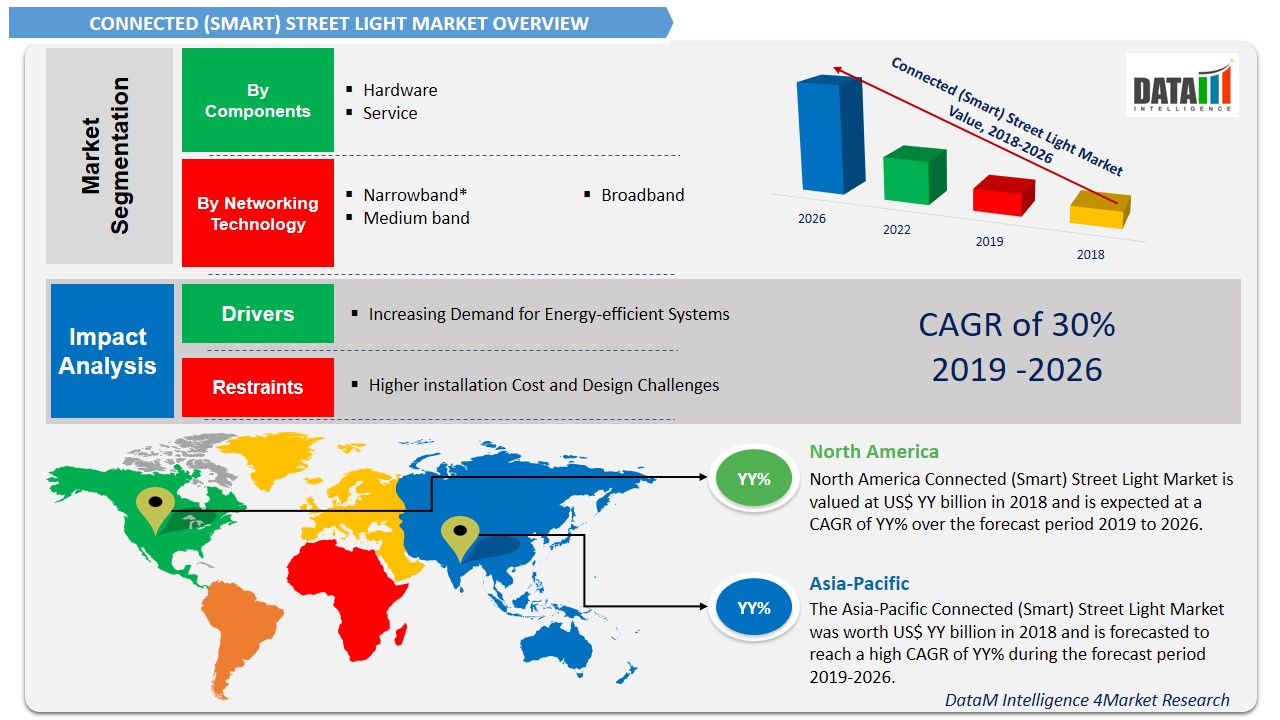 Connected (Smart) Street Light are devices that are used for lighting up the cities. In this, all lights are connected and have sensors which make them efficient by putting off the lights when they are not required or not in use. So, these smart connected street lights light up city streets with efficient power use. 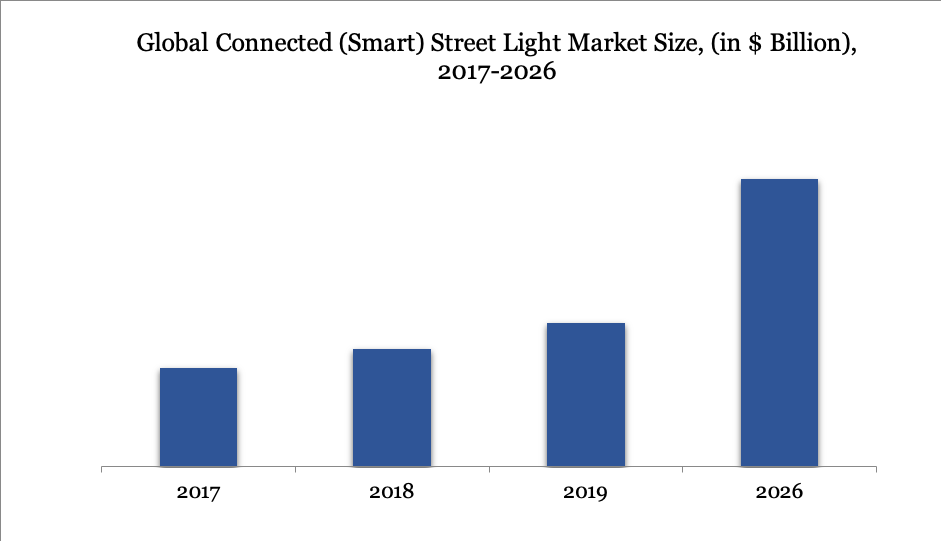 The global Connected (Smart) Street Light market is primarily driven by the growing need for energy-efficient systems like a smart street light. Increasing energy crisis globally has put the urge for the more energy-efficient systems that conserve energy. With the need for sustainable development by conservation of energy is expected to drive the market for the connected street light market over the forecast period.

For instance, with a population of 190 million and a generation capacity of 3,900 MW, energy poverty is still a critical issue for Nigeria. However, the country has abundant energy resources, and the potential of its renewable can serve as a solution to tackle the power crisis sustainably. The current political will to crack down on corruption is expected to gain importance and grow as a signal to encourage future investments in Nigeria’s power sector in the coming years.

The growing construction of smart cities all around the globe is the other reason for the smart street light market to have a positive impact in the coming years. Rising smart cities account for the increase in the adoption of IoT devices and LI-FI technology. There are huge investments in the development of smart cities all around the world. For instance, the Government of India (GoI) announced the 30 new cities under Smart Cities Mission, taking the total number of proposed smart cities to 90 cities. The government has announced to develop 100 smart cities in India. The government has planned to invest INR 1.91 trillion (US$ 30 billion) for the 89 cities under the mission. As per the proposed investment, 80% of the funds would be spent on area-based development (ABD) and the remaining 20% of the funds on ICT Solutions.

However, due to the high cost of initial installation and higher maintenance cost are some of the factors that will be hampering the growth of Connected (Smart) Street Light in the forecast period.

By Components, the global Connected (Smart) Street Light market is segmented into Hardware and Services. The hardware segment includes a light source, drivers and ballast, sensors, switches, controllers, and others. As hardware is the integral element of the smart street light, which will make the market grow at a higher CAGR for the hardware. It is expected that the Hardware market for Connected (Smart) Street Light market will grow at a CAGR of ~XX% during the forecast period.

By Networking technology, the global Connected (Smart) Street Light market is segmented into Narrowband, Medium band, and Broadband. The medium band has the dominant position in the Connected (Smart) Street Light market due to the reason that proves to be both reasonably affordable and technically suitable for the largest number of potentially desirable applications. 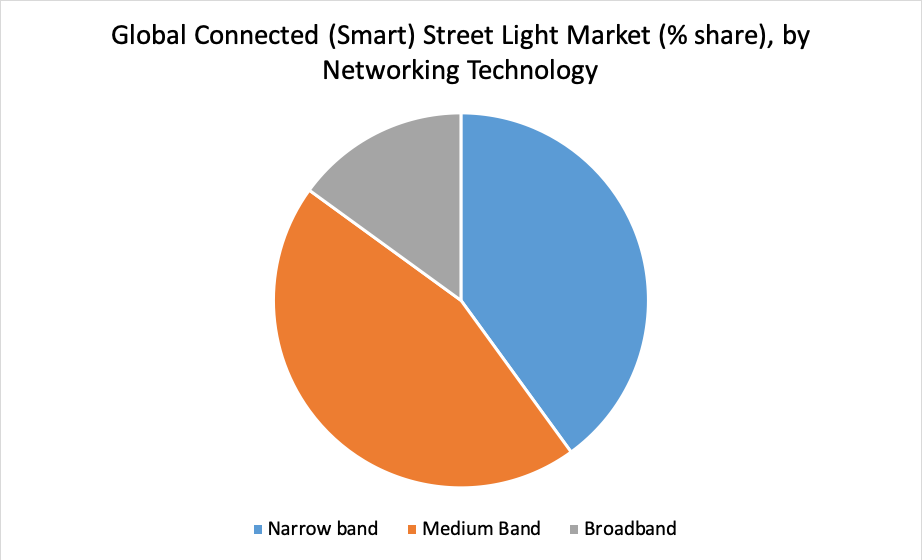 Europe holds the largest market share for Connected (Smart) Street Light due to the rising urbanization coupled the governments initiate for the energy conservation in the region. Also, the increase in the investments on smart street light installation by public and private will drive the market for the forecast period. For instance, in Europe so far, only a handful of cities have installed intelligent lighting. However, the European Commission has pledged to help fund a project to set-up 10 million smart street lamps around cities in the EU by 2025.

North America is after Europe in terms of the market share of Connected (Smart) Street Light due to the rise in commercial spaces like offices and the parking lots and also due to the high investments on the smart city development projects will be the major drivers for the smart street light market in the region. For instance, Chicago’s programs to replace 270,000 city lights over the next four years with LEDs and intelligent controls is a good example of the growing scale and ambition of street lighting projects. This initiative could eventually save Chicago $10 million a year in energy costs. The latest edition of Navigant Research’s Smart City Tracker includes smart city projects in 221 cities, a quarter of which are deploying smart street lighting ranging from initial pilots to citywide and regional deployments that span tens and even hundreds of thousands of lights. 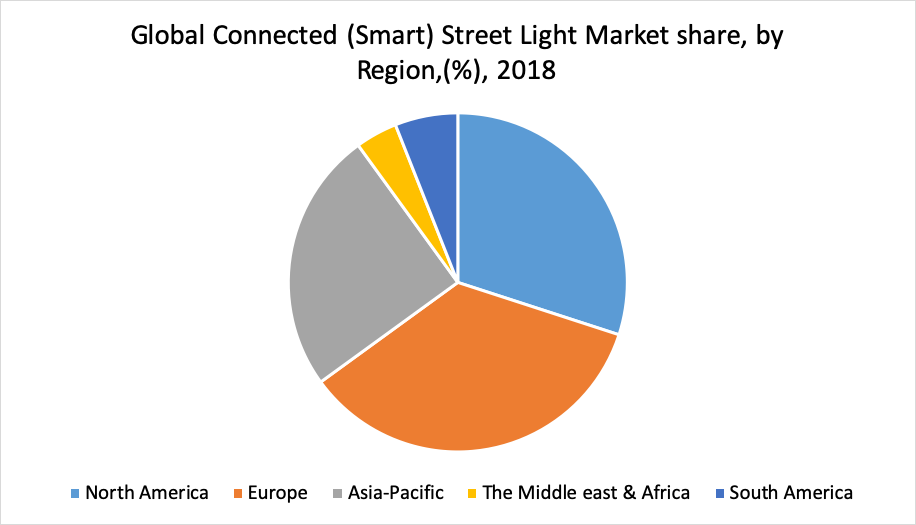 In April 2018: Telensa entered into a partnership with the government of Hong Kong to replace 600 streetlights in Yuen Long. This is a part of a pilot scheme that is expected to introduce more sophisticated and intelligent street lighting systems to the entire region’s urban infrastructure.

In February 2017, Citelum S.A. launched its new street lighting laboratory at the EDF Lab Les Renardières site to test the effectiveness of new technologies; evaluate their effect on electric networks; and find and develop new solutions for smart, economical, and eco-friendly lighting.