The global Commercial Drone market expected to reach $XX billion by 2026, at a CAGR of over 14% during the forecast period. Commercial Drone are finding large application in the various fields from road traffic surveillance to the delivery of products through aerial services.

An unmanned aircraft or ship that can navigate autonomously, without human control or beyond the line of sight. A drone is made from different light composite materials to increase maneuverability while flying and reduce weight. It can be equipped with a variety of additional equipment, including cameras, GPS guided missiles, Global Positioning Systems (GPS), navigation systems, sensors, and so on. 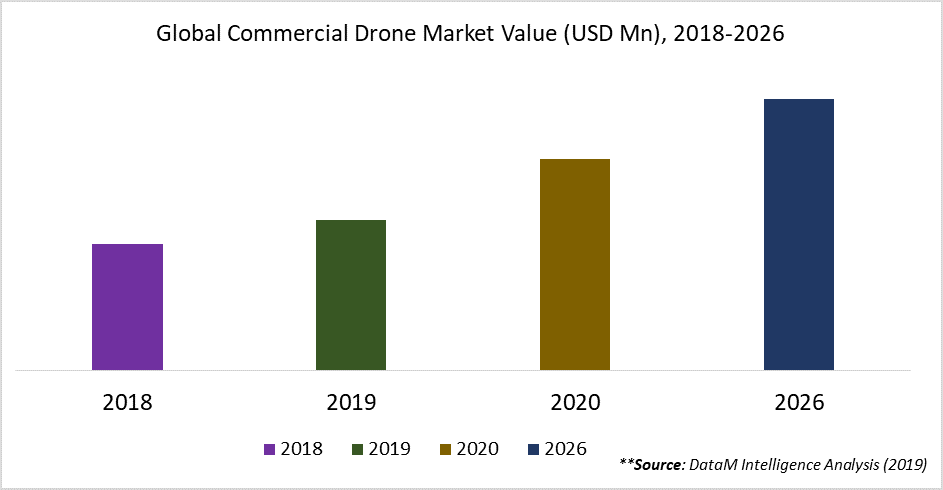 The global Commercial Drone market growth is primarily driven by the rising use of drones in a variety of commercial services. With the advancement in the technology the rise in the technology for the development of the advanced drone has been undertaken with the use of AI. Most of the countries are investing or have developed drones with advanced features and technology for various servicing. For instance, in 2018, Skydio, an autonomous drone startup based out of Redwood City, California, unveiled a product today that it’s been working on for four years. The R1, as it’s called, is an artificial intelligence-powered quadcopter capable of shooting 4K video of a subject and maneuvering complex environments all on its own. Using industry advancements in AI to help train a custom computer vision system, Skydio developed a product that’s effectively the first professional-grade drone that can be flown without any expertise.

However, the stringent regulations by the government and the adoption of the aerial images from the satellite are some of the factors that will hinder the growth of the Commercial Drone market for the forecast period.

By Product, the global Commercial Drone market is segmented into Fixed-Wing, Rotary Blade, and Hybrid. Rotary Blade has the dominant position in the Commercial Drone Product segment and is expected to retain its dominance in the forecasted period as they can land and take off from a confined place and have no special requirement to operate. However, the fixed-wing rotary blade can fly high has great application in topographic surveys, aerial mapping, and terrain modeling. Also, the market for the fixed-wing rotary blade market will grow with a higher CAGR in the forecast period.

By End-Use, the global Commercial Drone market is segmented into Agriculture, Delivery & Logistics, Energy, Media & Entertainment, Real Estate & Construction, Security & Surveillance, and Others. Real Estate & Construction has the dominant share in the End-Use segment and is expected to retain its dominance in the forecast period. However, the rise in the E-commerce industry the Delivery & Logistics services by drone will be driven with the higher CAGR for the forecast period.

North America holds the largest market share for Commercial Drone Market, a due to increasing demand for the use of Commercial Drone in all the various sectors such as agriculture, media & entertainment, and others. With the growing demand there are huge investment in the region for the development of the drones. For instance, California-based Joby Aviation says it has secured $100 million in Series B financing to take its all-electric passenger aircraft into pre-production and regulatory certification. Intel Capital led the investment round, which also includes Singapore-based EDBI, JetBlue Technology Ventures, Toyota AI Ventures, Allen & Company AME Cloud Ventures, Ron Conway, Capricorn Investment Group, 8VC, Sky Dayton and Paul Sciarra. Joby also revealed a previously unsecured Series A round, led by Capricorn in 2016, which brings total funding to $130 million.

Europe is after North America in terms of market share in the global Commercial Drone market, due to favorable regulations by the government. With the growing use of the drone in the construction and the agriculture area will drive the market for the commercial drones in the forecast period.

Asia-Pacific will be growing with the highest CAGR for the commercial drones in the next few years. China is the major contributor to the Asia-Pacific market. The drone industry is characterized and driven by one company: Da-Jiang Innovations (DJI), China. DJI has over 70% of the global market share for the consumer drone industry, with revenue of $2.7 billion in 2017. No Western-based company can compete with the complete supply chain integration, manufacturing pipeline, innovative pace and logistics support that defines the Shenzhen-based company. This provides immense and clear competitive advantages. 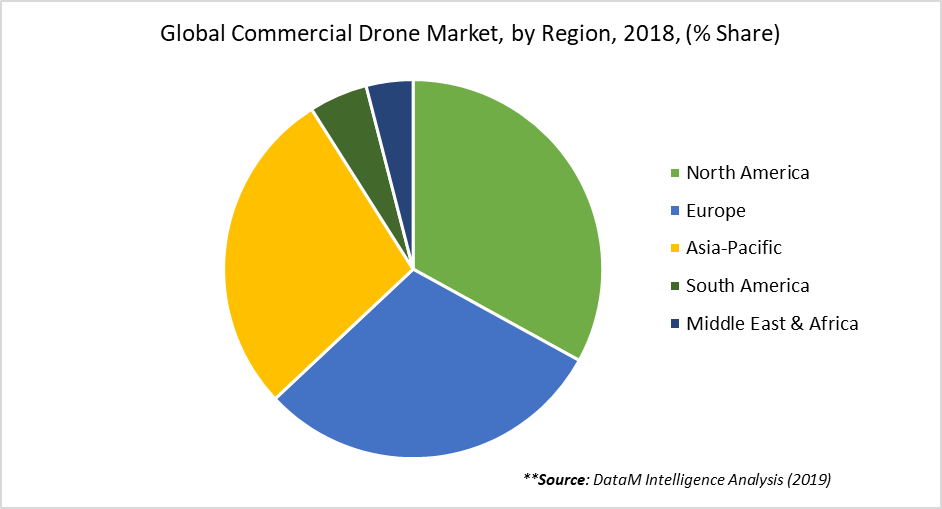 In October 2018, Leading Israeli automated drone startup Airobotics today announced a $30M Series D round of funding bringing its total capital raised to $101M.  Pavilion Capital is leading the round, joining a list of prominent investors, including BlueRun Ventures, Charles River Ventures and OurCrowd, as well as additional private investors. The new round of funding will be used to further scale Airobotics operations in the United States and Australia.  Airobotics recently launched its North American headquarters in Scottsdale, Arizona, where the company will run all North America, South America, and Central America operations. The Scottsdale office will become the company’s global headquarters as Airobotics continues to scale.  The funding will also be used to continue servicing the mining industry and other industrial facilities globally.