The global cardiac Ablation Devices Market is expected to grow at a CAGR of 11.1% during the forecasting period (2020-2027). 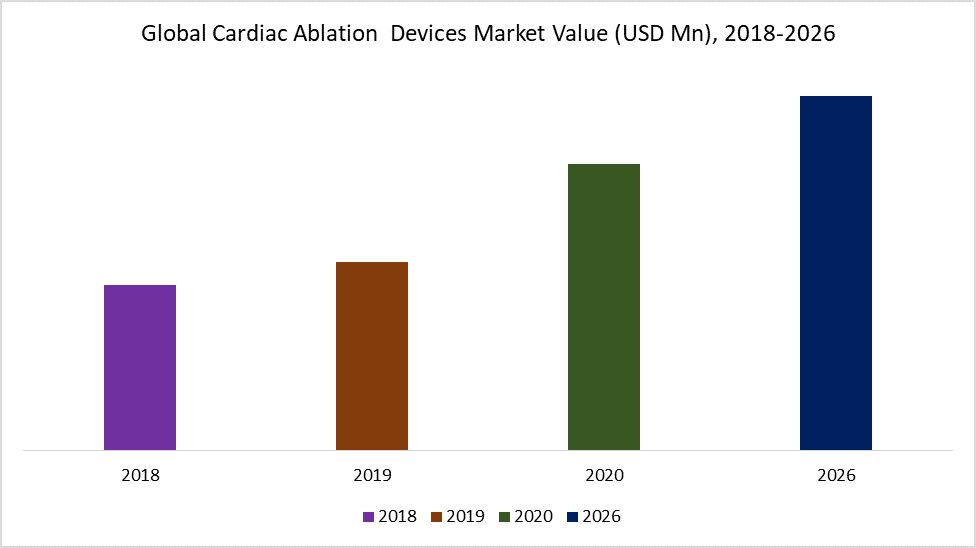 The major driving forces are the increasing number of people with cardiac arrhythmia, increasing geriatric population, rising healthcare awareness, and the growing demand for non-invasive procedures.

Increasing geriatric population is expected to boost the market over the period of forecast. Many nations are now facing challenges related to the ongoing and increasing demographic shift in age among their populations. As per the Department of Economic and Social Affairs Population Division of United Nations 2017, the global population of 60 years old will double and those of 80 years old will triple in the next 30 years. As per the World Health Organization, the number of people of 65 or older is expected to grow from 524 million in 2010 to 1.5 billion in 2050. Development of several chronic diseases such as cardiovascular diseases and neurodegenerative diseases are often associated with and more common among the older age groups. Thus, the growing geriatric population is driving the market.

The increasing research activities to check the efficacy and safety of ablation devices are expected to boost the market. For instance, on May 5, 2017, Penn researchers found that AF ablation to be safe and effective for congenital heart disease patients.

However, the lack of skilled medical professionals, stringent government regulations, and the onset of side effects are hampering the market. Among these, the onset of side effects is expected to restrain the market. For instance, stroke, chemical allergies, esophageal injury, or in rare cases, death of the complete heart is seen in less percentage of the total population.

Electric ablators are further segmented into argon plasma/beam coagulators and irreversible electroporation systems. The electrical ablation devices are expected to grow at a high rate, owing to the increased number of research activities. For instance, according to the researchers, who presented the study details at Heart Rhythm 2018, the Heart Rhythm Society’s 39th Annual Scientific Sessions, commenced a first-in-human electroporation ablation study and reported that pulsed electric fields could target the specific tissue for atrial fibrillation.

The global cardiac ablation devices market can be segmented by application into cardiac rhythm management, open heart surgery, and others.

Cardiac Rhythm Management is further segmented into cardiac arrhythmia, atrial fibrillation and flutter, and tachycardia. The cardiac rhythm management segment is expected to boost the market, owing to the increased number of researches, government approvals, etc. For instance, on August 19, 2019, Scientists at Johns Hopkins have successfully created personalized digital replicas of the upper chambers of heart and used them to guide the precise treatment of patients suffering from persistent irregular heartbeats. Also, on November 9, 2018, Loyola tested a new catheter ablation system that can reach deeper into the heart muscle. Loyola Medicine is among the two centers in the world, offering a novel catheter ablation system used to improve treatment outcomes for a life-threatening heart rhythm disorder called ventricular tachycardia. On January 30, 2019, according to the new research published in the January issue of The Journal of Nuclear Medicine, the Iodine-123 metaiodobenzylguanidine (123I-MIBG) SPECT imaging, when combined with cardiac magnetic resonance imaging (MRI), helped to identify specific subsets of heart tissue more prone to arrhythmia, which may allow physicians to achieve improved ventricular tachycardia suppression and shorter procedure times. Thus, the growing number of research activities are driving the market.

North America is dominating the global cardiac ablation devices market in 2018 and is estimated to hold significant market size over the forecast period (2020-2027) owing to the increasing prevalence of cardiac arrhythmia’s, presence of well-developed infrastructures, high volumes of catheterization for surgeries, increasing government support, and high patient awareness in the region.

The high volumes of catheterization for surgeries is expected to boost the market. For instance, according to the American Heart Association (AHA), catheter-based ablation procedures boast a 90 % success rate, having a lower risk of complications, and allow patients to resume the normal activities in a few days. Also, the leading companies such as Biosense Webster, Medtronic, and Boston Scientific spend millions of dollars each year researching and developing new devices to improve these success rates and to reduce complications during procedures.

Also, the presence of key players manufacturing cardiac ablation devices are boosting the market. For instance, in 2018, Acutus Medical, has announced that the AcQMap has been used for the first time in the US. The system’s novel catheter uses ultrasound and the electrical tissue conduction mapping to provide a novel electro physiologic live view inside the heart.