Coccidiosis is one of the most  prevalent parasitic diseases of domesticated animals, and its symptoms include weight loss, mild intermittent to severe diarrhea, and feces containing blood or mucus, dehydration, and reduced breeding. Coccidiosis is usually caused by single-celled parasites (protozoa) called Eimeria, which undergo a simple life cycle in the gut. Anticoccidial drugs play an essential role in the prevention and treatment of coccidiosis. Thus, the increasing incidences of coccidiosis are giving the key players lucrative opportunities to manufacture the anticoccidial drugs over the period of forecast.

Innovative animal healthcare products are expected to boost the market over the period of forecast. For instance, in April 2019 Creative Diagnostics has announced the launch of a series of innovative anticoccidial drug analysis services and products for its global clients.

The trends of owing companion animals which is responsible for the increased demand for anticoccidial drugs as dogs, cats and occasionally even horses are prone to coccidiosis, and if left untreated it could lead to the death of the animal. An increase in the expenditure on companion animals coupled with advancements in medicines, and product launches have fueled the demand in the market. For instance, IDEXX has launched various diagnostic products and rapid kits between January 2014 and February 2019.

Increased demand for animal proteins is expected to boost the market over the period of forecast. This is owing to the tremendous population growth, which also increased the export of meat, indirectly increasing the demand for veterinary healthcare. For instance, according to the WHO, there is an increasing pressure on the livestock sector to meet the raising demand for high-value animal protein. The world's livestock sector is increasing at a huge rate, and the driving force behind this enormous increase is a combination of population growth, rising incomes, and urbanization. Also, the annual meat production is projected to increase from 218 million tonnes in 1997-1999 to 376 million tonnes by 2030. The UN Food and Agriculture Organization, has estimated that by 2050, there will be a 73% increase in meat and egg consumption and a 58% increase in dairy consumption over 2011 levels. According to Boehringer Ingelheim by 2050, the global population will reach 9.7 billion people, with a significant increase in the middle class, and substantial growth in emerging markets like Africa and Asia. As a result, the demand for animal protein is expected to increase by 70 percent.

However, the availability of alternative treatment options in the market, the massive money in the treatment and prevention of coccidiosis, growing resistance of the pathogens are expected to restrain the market growth.

Growing number of  regulations and bans on the use of anticoccidial drugs along with the related costs in developing new drugs  increase the need for the development of novel approaches and alternative control strategies for coccidiosis. For instance, the use of alternative treatments such as vaccines, herbal remedies, homeopathy, phytotherapy, and aromatherapy to treat coccidiosis is likely to restrain the growth of anticoccidial drugs market across the world. Resistance has been documented for all those of the drugs currently employed, and therefore the discovery of novel drugs with unique modes of action is imperative if chemotherapy is to remain the principal means to control this disease.

Ionophore anticoccidial segment is expected to boost the market. For instance, a significant breakthrough in the prevention of coccidiosis through the feed medication  in 1972, with the initial launch of the first polyether ionophore anticoccidial, known as monensin. Ionophores are  fermentation products of Streptomyces and other fungi species; and are the most widely used drugs for coccidiosis prevention due to its broad-spectrum activity against the majority of pathogenic species of coccidians. In 2017, the US FDA reported that 82% of all domestic sales and distribution of non-medically important antimicrobials are from ionophores, costing to 4,394,850 kg.  Due to the factors mentioned above, the ionophore anticoccidial segment is expected to experience healthy growth during the forecast period.

Based on animal type, the global anticoccidial drugs market is segmented into poultry, swine, and others. The global poultry industry is considered most affected by coccidiosis as it causes the annual industry loss that has been estimated to exceed US$ 3 billion per year. According to the Agricultural Economics Research in 2010, in India, reported that the commercial broiler industry is a significant sufferer due to coccidiosis wherein 95.61 % of the total economic loss occurs due to the disease. Poultry production is projected to increase, and the control of coccidiosis will be essential if poultry and livestock meat is to fulfill the increasing need for protein by the growing world population. The presence of various vital players manufacturing anticoccidial drugs for poultry are expected to drive the market — for instance, Bayer's Baycox 2.5% for coccidiosis control and treatment of poultry. Huvepharma’s Amprol® 25% feed premix (amprolium) is used for the prevention and treatment of coccidiosis in broilers, replacements, turkeys, layers, and pheasants. The animals include chicken, dogs, birds, cattle, goat, etc.,

North America is dominating the global anticoccidial drugs market in 2018 and estimated to hold largest market size over the forecast period (2019-2026). This is owing to the availability of anticoccidial drugs, awareness for the prevention of coccidiosis, safe animal food supply, and high investment in R&D in developing novel products are likely to propel the North America Anticoccidial Drugs market during the forecast period.

According to the USDA Economic Research Service, the poultry sector is the fastest-growing in the meat product market in the US. The size of the poultry segment was around US$ 56 Mn.

The raised consumption of meat is expected to accelerate the anticoccidial drugs market in North America. For instance, according to the North American meat institute, the meat and poultry industry is the largest segment of U.S. agriculture. U.S. meat production totaled 52 billion pounds in 2017, and U.S. poultry production totaled 48 billion pounds in 2017.

Europe is the  significant region of the anticoccidial drugs market, owing to a highly developed health care industry, significant government funds for the development of veterinary medicines, growing awareness among people, and high consumption of meat. The Biotechnology and Biological Sciences Research Council has donated GBP 5.7 Million for the development of vaccines of poultry to the London School of Hygiene and Tropical Medicine in December 2015. 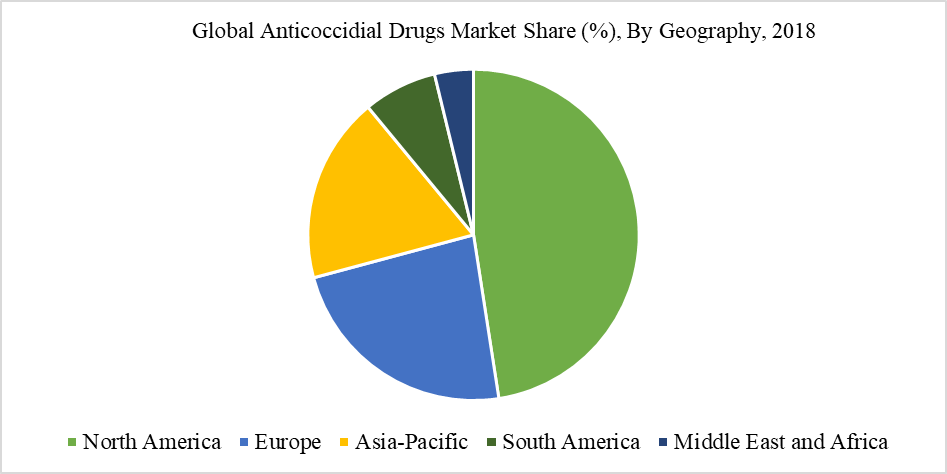 The key players are adopting various strategies such as product launches, mergers & acquisitions, partnerships, and collaborations, which are contributing to the growth of the Anticoccidial drugs market globally. For instance,
In August 2019, Elanco Animal Health announced that it would spend $7.6 billion to acquire Bayer AG's veterinary medicines business, which would make it the second-largest animal health company.

On May 21, 2019, Merck Animal Health, Kenilworth, N.J., USA, and NEADS World Class Service Dogs had announced the launch of BRAVECTO® Cares, which is an educational campaign showcasing the critical role of dogs  and the importance of keeping them healthy, including protecting them from fleas and ticks.

In January 2016, the Federation of Veterinarians of Europe released a position paper requesting the European Commission to update its 2008 report and to amend regulation EC 1831/2003 to require a veterinary prescription for the use of all anticoccidials.