The Global Cruise Tourism Market is expected to grow at a CAGR of 10% during the forecasting period (2021-2028).

Due to the rise in the disposable income of people coupled with the expansion in the cruise onboard facilities and offerings will grow the market for the Cruise Tourism in the forecast period. 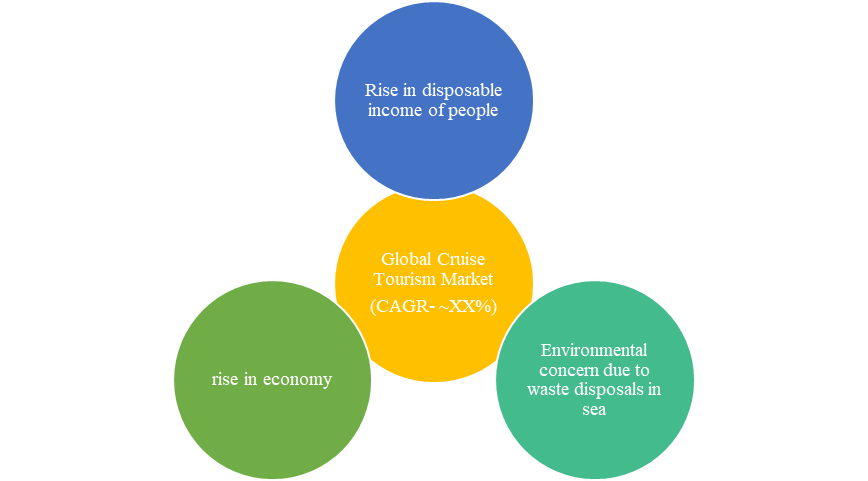 Cruise Tourism is the travel on the cruise ship. A cruise ship is a passenger ship used for pleasure voyages when the voyage itself, the ship's amenities, and sometimes the different destinations along the way form part of the passengers' experience. Cruise ships can carry up to thousands of passengers in a single trip and are some of the largest ships in the world by internal volume, bigger than many cargo ships. The following is a list of cruise ships with a gross tonnage larger than 120,000.

The global Cruise Tourism is primarily driven by the rise in the disposable income of the people all around the world, coupled with the increase in the preference of luxury life by the people. The growing demand for the cruise tour among all age people with all sort of fun activities for them according to the age group. The new innovative ships are coming up with new technological advancement and lots more onboard fun for the travelers to enjoy, and hence attracting large crowd all around the world.

For instance, Royal Caribbean has long been at the forefront of innovative cruise ship entertainment, introducing unique offerings never before seen at sea on its new ships over the years. It's the first (and only) line to offer ice skating shows in an onboard rink (on select ships) and water-based acrobatic shows in a pool-based stage area (on Oasis-class ships).

The growing demand for the cruise tours for a different location and increasing desire of people for the luxury travel is asking the providers to add new cruise ships which more luxury features and all greater number of cruises available for different locations to give options to the people traveling. The companies are all set for the rising demand by construction of new cruise ships. For instance, there are a record 42 ocean and river cruise ships under construction or on order for deliveries over the next two years (2019 - 2020). Twenty of these are large cruise ships carrying over 1,000 passengers each. Thirteen are mega cruise ships which each carry over 4,000 passengers. In addition to more than 167 cruise ships major cruise line companies have introduced since 2000. As this boom continues, 2019 - 2020 will be an outstanding year for new cruise ships.

However, due to high cost, higher operation cost, and also due to the environmental concerns are some of the factors that willbe hampering the growth of Cruise Tourism in the forecast period.

North America holds the largest market share for Cruise Tourism due to the rise in economy and the luxury taste of people there. Europe holds the second-largest marketfor cruise tourism. The United Kingdom and Ireland are the two largest European source markets for cruises, making up 28% and 26% of European demand for cruises, respectively.Italy, France, and Spain are other large European source markets. And cruise tourism market will be growing with a significant rate in the forecast period due to the rise in the river cruising.

For instance, the river cruise sector is growing by about 16% annually and is impressive with both the number of passengers and yields, especially on the market in Germany – the unquestioned river vacation travel market’s leader. River cruise ticket sales are growing faster compared to ocean-going ship vacations. Passenger capacity on the main European rivers is also increasing, and new operators emerge, the old one (world’s largest river cruise lines) renovate regularly or expand their fleets by building larger, new-generation boats.

APACis expected to be the fastest-growing market with double-digit growth rate due to the demand from the developing nations such as China and India. For instance, China's annual growth for the cruise tourism market has exceeded 40 percent since 2006. It is expected to grow into the world's largest cruise market by 2030, with 8 to 10 million customers per year, according to figures by the Shanghai International Shipping Institute.Australia is also growing in terms of cruise tourism due to the increased market penetration of people traveling in cruise is also boosting the market for cruise tourism in APAC to grow in the forecast period.

In March 2019, Italian shipbuilding giant Fincantieri has launched the Costa Venezia, a massive new cruise ship with a capacity of over 5,200 guests.With 135,500 tons and 323 meters in length, the Costa Venezia will be the largest ever ship introduced by Costa to the Chinese market.The Costa Venezia is part of an expansion plan that includes a total of 7 ships being delivered to the Costa Group by 2023, for a total investment of over €6 billion. It started its voyage from 8 March.