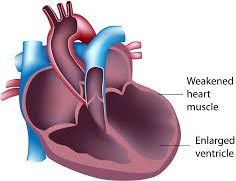 Dilated cardiomyopathy (DCM) is a cardiac disorder where the left ventricle of the heart becomes enlarged (dilated), and not able to pump the blood as effectively. The walls of the ventricle become thinner which gives the heart a spherical shape, can be a major symptom for dilated cardiomyopathy. The DCM causes effect on lungs, liver and other organs of the body steadily. DCM can also lead to arrhythmias (irregular heartbeats), heart valve problems, and blood clots in the heart. It is estimated that about 1 per 2,500 people are affected by DCM and it frequently occurs more in men compared to women. It also occurs in children and is the most common type of cardiomyopathy in this age group.

The global dilated cardiomyopathy market is growing due to several factors such as rising prevalence of heart failure and other cardiac disorders, increasing initiatives towards awareness about different types of cardiomyopathy globally, and rising research and development activities to innovate new therapies for the treatment.

In addition, the market players are vigorously developing drugs to treat dilated cardiomyopathy conditions. For instance, Array BioPharma, which is now acquired by Pfizer, is carrying out Phase 3 clinical trial for ARRY-797 that inhibits p38 mitogen-activated kinase inhibitor to treat dilated cardiomyopathy. Also, In May 2019, the Food and Drug Administration (FDA) has approved the use of Corlanor (ivabradine; Amgen) for the treatment of stable symptomatic heart failure (HF) due to dilated cardiomyopathy (DCM) in pediatric patients aged 6 months and older, who are in sinus rhythm with an elevated heart rate.

By drug class, the dilated cardiomyopathy (DCM) market is segmented into angiotensin-converting enzyme (ACE) inhibitors, beta blockers, aldosterone antagonists, diuretics, angiotensin II receptor blockers, anticoagulants, and others. Due to clinical outcomes and satisfactory patient compliance, drug class is most preferable option for the treatment of dilated cardiomyopathy. The angiotensin-converting enzyme (ACE) inhibitors drug class is estimated to occupy the largest market share over the forecast period followed by beta blockers, as ACE inhibitors act as the first line of treatment due to its positive clinical effects such as relaxing heart muscles and promoting blood flow. On the other hand, Angiotensin II receptor blockers help to regulate the blood flow by widening of blood vessels and reducing the fluid in lungs and kidneys. They are given with diuretics to patients that do not tolerate ACE inhibitors. Doctors prescribe these drugs owing to their effectiveness in the treatment of DCM which creates various opportunities for market players to develop these drugs.

North America accounted for the largest share of the market in 2018, and expected to dominate over the forecast period, owing to rising prevalence of congestive heart failures and increasing research & development activities for the treatment of DCM in this region. According to the Center for Disease Control and Prevention (CDC) data, about 5.7 million adults in the United States have heart failure in 2016 and approximately 610,000 people die of heart disease annually. In addition, presence of advanced healthcare infrastructure and affordable reimbursement scenario also drives the dilated cardiomyopathy market growth in this region. On the other hand, Europe dilated cardiomyopathy market is growing at the fastest growth rate over the forecast period, owing to rising prevalence of heart disorders. For instance, according to the European Federation of Pharmaceutical Industries and Associations, over 6000,000 are admitted to hospital, and 55,000 deaths are caused due to the congestive heart failure conditions in Europe.